Dozens of players braved alternately the unseasonably cold – and then unseasonably warm – Rochester weather to participate in the 2017 Rochester Riichi Open! Orchestrated by the Nine Gates Mahjong Club of the Rochester Institute of Technology, the tournament’s second year included both new and returning players to the two-day, eight-round event.

With a last-minute houtei-only hand and strong defensive play, Steven Harrison Smith edged out Christopher Omahen to win the event by only 1300 points! These two players will be put forward for an invitation to play in the upcoming World Riichi Championship – congratulations to both of you!

Steven, congratulations! Tell us about the tournament.

Thank you! Overall, this has been the best event I’ve attended because most of the players seemed experienced enough to compete without too many hangups. Each hanchan went very smoothly (quick, orderly play, good manners), and I can attribute at least part of my success to that.

You were a commanding presence throughout the event, leading going into the playoffs. How did you do it? What is your style of play?

For at least the first 5 hanchan, I played how I have been recently; try to build hands which compromise neither speed nor point value, don’t get frustrated when a great hand doesn’t come together, and defend against reaches unless I’m dealer. Also, because I’m unfamiliar with many of the opponents at an Open tournament, I tend to be extra cautious around those who get very quick hands (there is no real way to know if their hands will be worth a lot because there is so little information on the board at the beginning).

I really pushed my 5th and 6th hanchan because Alexandre Boily was so far ahead (at least 30 points above me) but ended up paying for it with nearly half my points. I made a rather bold move in the 7th hanchan, giving up what would have been an easy pinfu mangan for a risky sanshoku baiman. That single hand allowed me to dominate that hanchan and give me a comfortable lead going into the final table. I did a little quick math before that hanchan, and figured if I stuck close to even and Boily didn’t get first, I’d be OK. Chris Omahen, who has a very decisive style of play, took a big lead, and I had to do everything I could to retain points. Most of my hands that game were garbage, but the battle for second was all based on tenpai payments, so finishing these slow, worthless hands was necessary. I knew I still had a little chance because Chris was below Boily in the ranking, so I held strong. It was not a typical situation for me, I’m more comfortable coming from behind, as in the previous hanchan, than defending from above.

You are known for being a big fan of Tsuchida’s online mahjong blog and the works of Masayuki Katayama. Tell us why!

I am a big fan of Tsuchida-pro himself because I utilised chiitoi a lot when I first started playing. I love his “麻雀すべて” site because he gives a great structured approach to both digital and occult strategies of mahjong. We really need a resource like that for the English speaking and reading reach mahjong community. I have been a fan of Katayama ever since reading Utahime Obaka-Miiko, which is one of my all time favorite manga of all time. It has some great characters and story arcs, as well as a lot of humor. All of Katayama’s manga are filled with in-depth strategic and instructional advice, but are presented in a simple and entertaining manner. His works are fun for people who have a love for the fundamental game of mahjong moreso than the bravado and outrageous occurrences surrounding big gambles (though those are entertaining as well).

The locals say that you are part of a mahjong group known as “The Committee”. Members have done very well in North American events (Ty Kennedy getting 4th both in this event and the USPML NYC 2015 Tournament, for example). Any insight as to what they are talking about?

“The Committee” was a group that Ty, Estey (another local player), and I devised a bit before the NYC open. The three of us were emerging as the top local players, but we all had fundamentally different styles of play (Estey was strictly digital, I was occult, and Ty was somewhere in between). If one of us was in a game, the other two would flank him and try to influence his discards by “committee” (nobody ever agreed). We all drove down to the NYC open together, and even got a hanchan with Hiroshi Yamai! We thought we had Yamai-pro beat, but he came back with a huge tsumo at the end (I still maintain that he planned the whole thing).

What’s next for you?
I recently started a brand new job, so my schedule is a lot more of an unknown than it was three weeks ago. I would love to attend some of the upcoming events to support reach mahjong in North America, and encourage everyone else to do so as well. Whatever happens, I definitely want to make it back to Japan soon and play in one of Katayama’s parlors, or maybe even attend one of Tsuchida’s lectures in person!

We also took some time to catch up with Michael McLeod, the RIT Nine Gates Vice President, and Patrick Garrity, the President.

Two successful years of tournaments! How do you do it?
Patrick: We have been working diligently to plan out where, when, and how the tournament will be run since the start of each new school year. We attempt to plan ahead and make sure we have everything we need before the weekend of the tournament. Obviously there will be some things that come up last minute but we make sure that there are ways to solve any last minute problems that may come up.

Mike: As a Rochester Institute of Technology student organization it has been relatively easy finding a suitable venue. Though of course it depends on how far in advanced the room is booked, so we tend to begin preparations 6 months in advance with a list of objectives that need to be met, a timeline of when those things need to be completed by, and going over the logistics of it all. This is generally handled by the current Nine Gate Mahjong Club executive board, and as the event comes closer we communicate more closely with the selected head judge to confirm what we will need to provide for them by us.

More importantly, we wouldn’t have such successful events if it weren’t for the people – without Rochester folks, willing to dedicate their time to learning, teaching those who are interested, and participating in local meetings, these events we would not be possible.

Tell us about your club – RIT Nine Gates Mahjong.
Mike: The RIT Nine Gates Mahjong Club started 8 years ago with just 4 friends primarily playing Japanese riichi mahjong. Over time, as new students would arrive who had previously played other variants, this club accommodated them with different tile set sizes for those who have a preference. Additionally, we began to pickup locals who were familiar with the game but did not have enough people to play with in person. So far, we having Friday night meetings on RIT’s campus, and Saturday night meetings at the local anime store, Hammergirl Anime. With each passing year club gets a handful or more of new players with the incoming freshman class, friends of current members who happen to learn, or local people who pick it up at the local store. We actually had one of the founding alumnus, Jeffrey “Moku” O’Connell, who now plays in the Boston area, returned to this recent Rochester Riichi Open. He was really happy how far we’ve come. I was also brimming with pride and joy with where other board members, Patrick Garrity, Jaben McCormack, and I have managed to bring club from 4 people playing on the roof of the art college to hosting large tournaments with players from all over the US and Canada.
Patrick: RIT Nine Gates Mahjong is a club that was created about 7-9 years ago (if I remember correctly) and has had an average of 20 players every year. We attempt to get new players each year due to incoming freshmen entering Rochester Institute of Technology and have been successful on keeping those numbers up. Our club is a member of the North American Riichi Mahjong Association and we also welcome players from outside the school population. Many RIT alumni constantly return to our weekly meetings to get a few games in each week. We look forward to continuing this tradition and increasing the population of mahjong players in North America.

Any fun stories from the event?
Mike: In the first two riichi mahjong tournaments I attended in the United States, I managed to rank 13th place in both. So, the current joke is that given 28-40 random players, statistically I am at a level of play that will always reach around 13th place. I worked very hard to prevent this on the first day ending in 9th, but by the end of the first 6 hanchans, I ended up at the table fighting for 13th place at the time. In the end I managed to come out ahead at 10th place, which is good progress in my book.
Patrick: Other than being able to meet mahjong players from all around the United States and Canada, I personally did not have any great stories, but I do remember Mike getting his first Chankan this tournament. It was pretty awesome to hear those words come out of someone’s mouth (especially at a tournament) and I’m sure he enjoyed the moment it happened.

Lastly, any future events planned?
Mike: Of course we look forward to hosting the Rochester Riichi Open once again next year. On a local scale, we may be adding a more informal meeting earlier in the week to review concepts such as tile efficiency, targeting certain yaku, and understanding how to read against opponents discards and play safely with newer players rather than immediately throwing them to the sharks after learning on Fridays where we get the most turnout.

Thanks very much, Michael and Patrick! Looking forward to further events in Rochester! 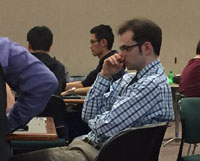 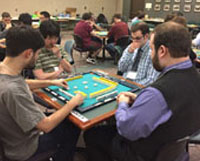 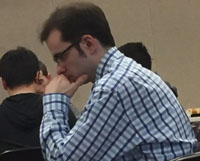 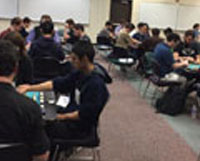 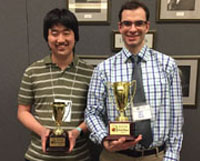 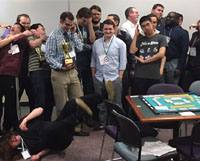