Over two dozen mahjong players braved a record snowstorm to play in the 2018 Rochester Riichi Open. The two-day event in Rochester, NY featured players from all across both the United States and Canada. At the end, Arthur McAnally emerged victorious, entering the final match with a large lead and winning with a first place nonetheless. 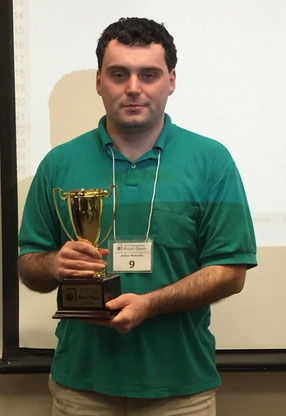 “I had a great time, thank you for helping with playing in person!” For Arthur, this was only the third time he has played with live tiles. “I’ve played online for years.” A fifth dan on Tenhou, he says his style is to not deal in. “Get out when the time is right.”

Arthur has very recently started his own club, two weeks to the day before the tournament. The Baltimore Mahjong Club, while only four players, can already boast of a champion. In his final game, Arthur, as first dealer, scored back-to-back mangans, giving him a healthy lead that his opponents could not overcome.

The tournament had a number of highlights – two rinshan wins in a single round, a chin rou tou yakuman by Californian player Daniel Moreno, and a Saki Side-A Live Action Movie puzzle-themed goods giveaway (try it yourself below). Thanks to everyone for attending, and we hope to see even more players next year! 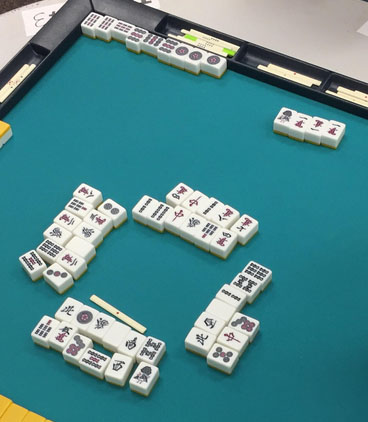 Puzzle: Two of the face-down tiles were winners of the clear files on the left and right. Which two tiles were the correct choice? 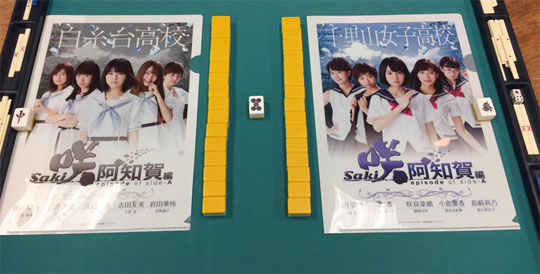 Answer (highlight between the ** for spoilers):
**
The top tile in the left column – the Red Dragon – the winner for the Shiraitodai prize, and the bottom tile in the left column – the Green Dragon – won the Senriyama. Their positions match their positions in the standings of the Side-A story – the 71st Inter-High Championship.
After reading the spoiler, click to see!
**