We had the opportunity to talk with Shinasaka Koji, a prominent mahjong mangaka (manga author), about all things manga and mahjong! While some people in the West may know him for his more humorous, older work “High School Mahjong Club”, that’s just the tip of the iceberg – with thousands of pages of mahjong manga in print, there’s a world of great reading out there. Read on!

Thanks for taking the time to talk with us today! When did you decide to become a mangaka?

When I was in high school, I drew manga with my friends for fun. When I graduated, I spent my own money in order to publish a book. It was pretty thin, only around 40 pages of work. By a stroke of luck, an editor of a publishing company read it and said to me “Do you want to aim to debut with our magazine?” It took 4 years, but then I debuted.

Are there any particular manga that have been an influence on you?

I love “Fist of the North Star”! For a while I tried to emulate its style.

‘Tohai’ (凍牌- ‘The Frozen Tiles’) is about a young rep player by the name of K that bites off more than he can chew, winning a mysterious girl from a human trafficking ring. 12 volumes long, it is followed by ‘Tohai ~ Hitobashirahen’ (凍牌~人柱篇 – The Frozen Tiles ~ Human Sacrifice Volume), where K and his allies face off against an implacable enemy for control of a document that could change the world.

What themes were most important to you personally as you were creating Tohai? What themes and messages are you hoping to get across?

Tohai is a story about using wits to fight against strong violence. It is very entertaining, readers should enjoy it!

The change from Tohai to its sequel, do you feel as if it has a different tone?

‘BW’ (BW ビューティフルワールド) features mahjong players who, by betting their lives, can collect the ‘lives’ of others. One particularly good player, protected by a lady bodyguard, aims for the top, learning astonishing things about the world they are in.

The ending of “BW” was very surprising! Do you plan on returning to Sci-Fi themes in the future? (SPOILERS!)

I have never told anyone in Japan, but I originally planned for BW to be longer. Takumi and Akane were both supposed to be (digital) characters within the game. I was planning to draw the story of them fighting humanity (the people in the real world). Leading up to the destruction of the world financial system. I am disappointed that I couldn’t draw the whole planned story due to the lack of popularity.
I love science-fiction. I drew a sci-fi work called “S-2” before. This also was not popular enough to continue (beyond 3 volumes). “Interstellar” (the movie) was fun. I would like to draw more science-fiction work if I get the chance.

Japanese Sci-Fi is becoming more popular in America, The movie “All you Need is Kill” was very well-liked, and “Knights of Sidonia” is a very popular anime. Do you think any new Japanese Sci-fi books or movies are especially powerful or influential?

I also love All You Need is Kill. I love MOONLIGHT MILE – especially the early part of it. The story of Japanese technicians developing a robot working on the surface of the moon is a wonderful one! Apart from that, “After 0” (a sci-fi collection from the early 2000’s), despite the lack of readers, is a good one too. It’s an omnibus. [The story about] proving there is no afterlife using math is interesting. (In After 0, there is a short story about the fallout from a report that supposedly proves there is no afterlife)

It seems the manga industry has many ups and downs, even for someone as popular as you. We’re all glad you can continue to release such great works. One of your standalone comics, Sparrow’s Song, is a very humorous portrayal of a mahjong parlor. Is it based on any personal experiences?

I love going to mahjong parlors. Many ideas originated there.

“Sparrow’s Song” is about the managers of a mahjong parlor and their bubbly part-timer, trying to attract customers through a number of zany-schemes. On a more serious note, “Bakuto” revolves around a high-schooler beating cheaters at their own game.

How did you come up with the cheats used, and the catching of them, in “Bakuto”?

It’s always hard to come up with cheats. I watch the news everyday, so it helps me to come up with ideas. I drew a cheat based on a liquid that reacts to perspiration that can be seen by special contact lenses. Also, the special ink used in paper currency (anti-counterfeit ink) also gave me ideas.

Doujima, a sometimes-friend, sometimes-foe of K in ‘Tohai’, has his own spinoff, called ‘Lion’. Set in the same world, it focuses on more over-the-top, high-stakes games. It continues in Kindai Mahjong!

Are you excited for the return of “Lion”?

This is the story a little bit prior to when Doujima (Lion) met K. I have many ideas in my head about this. And yes, this is exciting for me! New characters will show up, so please look forward to it.

One of the highlights of a good mahjong manga is showing the flow of the game. How do you get inspiration to show entire games? Do you plan a certain important hand or scene, and then build the rest of the game around it?

This is hard every time I do it. I think about the key points of the story and then consider the game. Think of it like thinking of the boxscore for a baseball game. (The boxscore is a complex play-by-play shorthand used by baseball afficionados, a way to take in an entire game at a glance)

Tohai was made into a movie and six-part live-action series, available on DVD.

What was it like being on the set of the live-action Tohai?

Actors who are portraying yakuza are scary. But they are actually kind when I talked to them. Also, the sound of air conditioning interfered with some of the filming, so the A/C was turned off during those times. It was very hot.

Why did you start playing Mahjong?

A friend taught me at the same time I graduated from high school. It was so fun that I played for 30 hours straight. I still enjoy playing with him even to this day.

What was your most memorable game?

When I got a tenhou! I had to think whether I needed to say “Tsumo”.

You are a very strong Mahjong player – you are doing very well in the GPC (The Good Players Club, a Japanese Mahjong league headed up by mahjong manga icon Masayuki Katayama), alongside many other influential players like you. Does your skill come from the amount of mahjong you have played over the years? Are there materials you would suggest to players looking to improve?

Do you read other Mahjong manga? If you do, who do you like to read?

It’s a bit old, but Happo Yabure (1984-1987 – by Kaiji Kawaguchi, writer of “Zipang” and “Eagle”) is a great mahjong manga. It is the most influential work for my own mahjong manga works. Tokyo Game (by Aoyama Hiromi – writer of Bird and Gamble Fish) is another great one. This one is also old.

You also have doujinshi for MariMite and PreCure! Did you have fun creating them?

I wanted to print the PreCure work in Kindai Mahjong, but the editor said no, so I self-published it – and it was fun! I want to make more dojinshi in the future.

Working on multiple manga, do you have time for any hobbies? What do you do on your off time?

I do not work on Saturdays or Sundays. But other days are very busy for me. I either go mountain-climbing or play mahjong during my off-time. I have good friends for both hobbies, so it’s very fun for me.

Wow, Mountain climbing! What an adventurous hobby. Have you climbed Mt. Fuji?

I have climbed Mt. Fuji twice. There is a list of 100 mountains in Japan called”“Hyakumeizan” (“100 Great Mountains”), and my dream is to climb every one on the list. Mountains are like Disneyland to me! 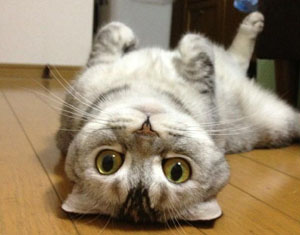 Please tell us about your cat, Nagi!

I live by myself. If Nagi weren’t here, I probably would have died due to loneliness. I’d like to put her in the Guinness Book of Records as the cutest cat in the world!

We agree. Lastly, do you have anything you’d like to say to your fans?

The interview was a lot of fun for me. I will be drawing more manga, so if you would kindly read and enjoy my work, I would be very happy!

Thanks for your time, Shinasaka-sensei!

You can find his works on Amazon Japan, including Kindle for immediate download.