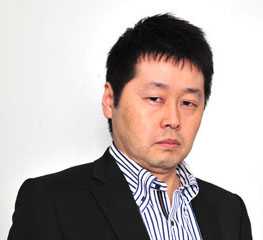 At the WRC, we had the good fortune to meet with
Masao Kuroki (黒木 真生), GPC celebrity league manager and JPML pro. We got to ask him a few questions about the WRC, his life as a pro, and his favorite band!

– Did you enjoy WRC? What was it like playing with people of many different countries?

“Because I play mahjong as a profession, I went to Las Vegas with the intention of winning the WRC, so unfortunately I was unable to enjoy WRC as much. However, I was very happy to see players from all over the world playing mahjong seriously yet while also having fun.”

– What is being a pro like? What activities do mahjong pros perform?

“Well-known and popular mahjong pros make a living by playing mahjong on television programs or by playing mahjong at parlors.
For mahjong pros with either low-profile or not as famous, they make a living either as teachers in mahjong classrooms or by working at parlors.
There are also many mahjong pros who works at normal workplaces.
Tournament prize money and such is too low for someone to just live on that.
In my case, I belong to a group that makes mahjong books, “Babylon”, but despite its name, I also work on other tasks such as being the consultant for events / televised matches / mahjong game software, etc, in order to get by.”

– You are a GPC Judge? Is it interesting? What do you do as a judge?

“I manage the celebrity league of the GPC. The general league is spread nationwide, and operated independently.
The celebrity league is fun because those from all walks of life gather together – mangaka, voice actors, anime creators, film and television actors, singers, even a former boxing world champion.”

– During the WRC there was a Megadeth concert! We heard that you were a
Megadeth fan. What is your favorite song or album?

“I’ve been a fan of theirs since high school, and while I still listen to their works from back then, I also love their newer songs. Their new album “Dystopia” is the one that I listen to the most currently. Of their older works, I love “Hanger 18” and “A tout le monde” the most. Because “A tout le monde” had a lot of non-English phrases, I looked up their meanings, and I was worried that Mustaine [Lead singer / songwriter of Megadeth] was dying. (laughs)
I was silly to not attend the concert of a band that I’ve been a fan for 27 years which was taking place in the same hotel.”

– For players looking to increase mahjong skill, do you have advice? Are there books or videos or activities you recommend?

“With more than fifty years of reach mahjong history in Japan, there are many books on tactics. It is now an era where information can be easily retrieved, but I still think there is a problem with written text in other languages. We are preparing to translate a Japanese book on mahjong tactics. If there is a demand, we can continue to do so in the future.”

Thank you very much, Kuroki-pro! We hope your future in mahjong is very successful!

For an interview with Masao Kuroki about his pro test, click here (Google Translate).

For an overview of the WRC finals written by Masao Kuroki himself, click here (Google Translate).