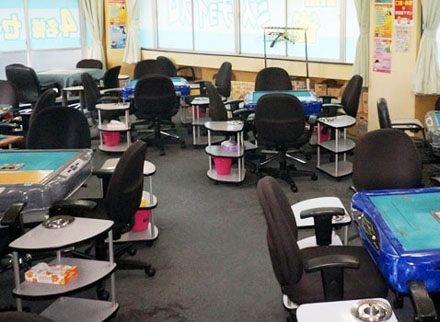 Mahjong parlors (“jansou”) in Japan are one of the best ways to see just how good you really are – with real stakes on the line, the cream rises to the top. Learn some basic etiquette and what it’s like to join and play at one.

Visiting for the First Time
I’ll go through an average first time visit. You show up, they ask if you’d like to play, you say that you are new. You have a seat in the “Waiting for a game” area, they bring you something to drink, and a staffer comes over with the book of rules. Goes over the parlor and manner rules with you, “do you understand”, etc etc., and then if everyone is cool, you fill out an application, get your card (keeps track of your games, rewards, etc – think of it like a casino card. All the chain places use them) and then sign in for the day.

Manner rules cover things that you may not initially expect to be taken as “bad manners”. For example- no humming, sighing, or tongue clicking (‘tsk’) is allowed. No slamming tiles, ‘chasing rabbits’ (looking at facedown or other wall tiles post-hand), no wrecking the wall angrily when you lose, and so on. Upon winning, reveal your hand all at once. Depending on your language skill, they may have you play your first game with staff only – if you aren’t too confident, try to come earlier in the day, when it is less busy.

This brings me to a side note, bolded for emphasis: don’t dress like a hobo / otaku. I go in a suit and tie, and then maybe, maaybe not the tie. The reason for this is you don’t want to get bounced for looking like a stupid kid or a hobo. Had this happen to a friend of mine. Sure, you don’t need to do this, but you have to be able to get past the “some american guy wants to play mahjong, and his japanese is a little slow, get a load of this idiot” reaction you’ll get at a lot of places. Being a foreign salaryman helps.

“Foreign Friendly”?
If you can’t speak japanese conversationally, not in the least. This goes the same if you play slow (hanchan in 40 minutes is standard: tenhou’s 2-5 is the absolute slowest you can play, and even then that is pretty bad), have bad manners (making noises, being upset / loud / stupid, slow at counting points, etc), and so on. However, being a foreigner actually opens some doors – if you can play, it is all “hey look that foreign guy can play mahjong”. Also, many parlors’ first question is “where else do you play”, and they’ll look at your card from that place, to see if they put up with you okay. Then, you’ll probably play a supervised game, so they can see that you aren’t a fool, that you play well enough, etc. They may skip this for people, but there are extra hurdles if you don’t seem the type that would play mahjong – I’m a pretty big dude, and my Japanese is often accented (I got that from reading too much shoujo manga while learning the language 😐 ), so I know I sound a little silly sometimes. Make sure you know the names of the tiles – it isn’t “nii-pin”, it is “ryahn-pin”. 3-6 wait is a “saburo”. etc.

A Usual Day at a Parlor
Here’s how a day goes at a typical parlor. Come in, you say you’d like to play, they take your bags and coat, they ask what rate you’d like (Tenpin, Tengo, etc). You pick the highest rate you are okay with, and if you are okay with being sat at a lower rate table. You give them placeholder money – generally 10,000y – that you’ll get back at the end of the day. (this is to make sure that you can pay your debts, and that you’ll be here a while. Generally, you will ‘earn that back 20% per game’, so you are saying that you’ll be here for 5 games). They may give you a chip, or a table sign, or a tag, or something, to show what rates you’ll play (like say a blue little standee thing that means to the workers “this guy will play 0.3”, a gold one for “will play anything”, etc.) You have a seat in the ‘waiting for a table’ area, where you can peruse mahjong stuffs (generally a manga shelf, a ‘what would you cut’ / strategy book section, and of course, newspapers and kindai mahjong). When a seat opens up at a table, they’ll call you over. They will also call you over to take the place of a rep player if the game is still early (“Rep Player A-san has 24500 as South, West / North / East are XYZ points, and it is East 2. Do you want to take over?”)

So, sit at a table, and play. Deal passes at all notens (even if dealer is tenpai), and if the game goes over 45 minutes, they will call “next hand is last hand”. There are rep players – store employees that ‘fill in spots’ in games. They play with house money. Play is fast – very very fast, if you aren’t used to it. In tenhou terms, it is probably 1-2. Now, yeah, people bailing from a reach may take a second or two more, but taking 10 seconds for a discard is an eternity, and is way way too slow. Also, parlor play is generally much much more defensive, and less reach-y. Pretty much people only Reach when they plan on drawing it themselves, or if someone else Reached and now that person can’t ‘bail’. I honestly see more “roulette reaches” (2nd+ reach at the table) than reaches themselves. High-risk play doesn’t happen very often – while the occasional big hand vs. big hand occurs, dealing into a dealer full flush with dora, or something else obvious, is very punishing, and can make people gun-shy.

Often times the table will draw your opening hand for you – it’ll just pop up in front. Note that if you are dealer it does not draw your 14th tile to start.

They don’t ‘break the back wall’ at most places – you figure out the end of the dead wall on the fly. Also, after starting hands are drawn, use your right hand only. No joke. This keeps any discards from being ‘covered’ by your hand for the player to your left, since the time beteen discard and draw is very short, this matters. As dealer you roll the dice, and reach out and grab the tiles to draw – leave the dora flipping to whoever’s wall it is. The tables that auto-draw your hand have fallen out of favor – people like drawing, and you sort as you draw, so it doesn’t really take extra time (auto draw tables, everyone sorts in the first round of discards anyway, slowing it down, so who cares).

Most people don’t really organize their hand until after they reach or when they ron. This doesn’t mean completely random tiles that take forever to look through, though. a hand might look like 321m7778s67m etc etc. Tiles far enough away from each other may as well be a different suit.

Lots of hands go to noten payments – 20-30%. Lots of bailing. Lots and lots of no-reach fully closed hands. dealing into a reach without being reached yourself is really rare. When you want to quit, you have to say that BEFORE your last game starts. So, if you want to play 6 games total, you have to say “Last Han” at the beginning of South 4 of game 5. Playing less than 4 games in a session is very non-standard – you are there for 4 games or more. Generally, if you played mahjong with your friends, one “game” would be playing for 4 hanchan.

There is no stopping – no bathroom breaks, or anything like that. When you want to take a break, you call for a rep player to take your spot, and playing on your behalf until you get back. You can call for drinks at anytime – most things are free, you can get alcohol / food inexpensively as well. Hot towels, cold towels, etc, all free.

At the end of a game, everyone who lost money pays first place, then first place pays out to anyone else who made money, and First place pays for the table. Table fees are the same regardless of rate, so you generally play as high a rate as possible so the fees matter less. Generally, a first place will net you about 7,000-10,000y net, and the other players lose a total of 8k-11k.

Once you leave, you get your deposit money back. If you play less than X games, you only get that percentage back, sort of like a penalty – if X is 5, and you play only 4 games, get 80% of it back. 3-5 seems pretty standard.

At the big chains, they ‘announce’ everything. “Game for is starting over here, give it your best! (everyone else working: ‘give it your best!’)” “congratulations to Player Y for that yakuman, hooray!” “This game is entering all last, scores are ABCD, give it your best!” “welcome to our place!”, “thank you for playing, see you again soon!” That’s a Japan thing, though.

Personally, I like playing at the chain places. Rewards, schedules of when pros will be there, people are less likely to flip out at bad losses because they are so ‘invested’ in a single place, and so on. I’ve only had a couple high-tension things happen playing in jansou (mostly people getting ticked off at a trap wait or being preyed on, or not having the money to cover) – most people, at least outwardly, enjoy both winning and losing.

You get to know the people at a parlor really quickly – the old guy who’s really good, that college kid who skips out to play, this pro, that pro, and so on.

You’ll all pay 1000y, but you ‘win’ coupons that let you play discounted later. “Open” are “me and my three buddies want to rent a table. here’s X per hour. okay, let’s go play for funsies”

Smoking
There is a lot of smoking. It is super super super bad. Super bad. When I go to parlors, I bring a change of clothes in a sealed bag. I go to a food place first, and then change from my street cloths to my parlor clothes, putting my street clothes in a bag, and putting that bag in an outer bag. Go play MJ. then, go back to food place, throw out outer bag (it has smoke goop on it from being there), change back, seal parlor clothes bag, go back to hotel, shower. No joke it is that bad. You have to get used to it, though. 🙁 There are some non-smoking places, though, although to be honest I’ve found the best play at the smoking ones, enough to go to them over the non-smoking ones.

Chain Parlors
There are a bunch, I only know a couple – lots of places are standalone. San Group is a big chain (red 3 pins, not red 5s), they are the Queen’s Cup people. Marchao runs a bunch of medium to slightly high rate parlors in Tokyo. Zoo has a few places, often multi floor, one being a nonsmoking rentable one. Miss Choice is Katayama’s chain (The Obakamiiko guy, super super famous “teaching mahjong” manga guy). I absolutely suggest going to a chain over a standalone place, they are more open to newcomers. Newbies should go to a place like “Shibuton”, it is famous for being a “learning to get better” no rate jansou. But yeah, if you want to see ‘real’ reach mahjong, go to a 1.0 parlor with a quickness.